When the unthinkable happens.

Every parent I know has the stories. You know, the terror moments, the turn your back for a moment and where the hell is my kid moments. Some have many, many stories, but there is always one that plays in the mind like a looped video, that pivotal moment of pure panic.
For us, it was an incident while camping.
Last summer, the Monkey was four. He was entirely non-verbal with strangers then, although he had a few words for us and a lot of scripting of TV shows. He couldn't swim, but we were working on it. He had more of a fascination with the public toilet building than the lake, but he generally stuck close to the campsite. We stuck a bear bell on him as a tracking device, and with 6 adults and a teenager present, we didn't really think there was much chance of losing track of him. His 18 month old sister, Kitten, was content to play in the mosquito shelter with rocks and sticks, and just had to be watched so she didn't consume as much of the great outdoors as would fit in her mouth.
I was digging in the car for lunch stuff, when I noticed that Monkey wasn't in sight. I didn't worry at first, I just called out "Where is Monkey? What is he up to?" No answer for a moment. "Who has Monkey? Who can see him?" A little apprehension growing. I stood up to look around and didn't see him. Kitten was in the shelter. Hubby was watching the fire. Various other members of our group were hanging around, reading, talking, doing what you do on vacation.
Monkey wasn't there.
A quick survey, and it was clear that no-one had seen him for a few minutes. NOW I was starting to panic. Our spot was right across the parking lot from the lake, and while he couldn't swim, Monkey was fascinated by water that wasn't confined to tubs and sinks, and he loved playing in the sand. 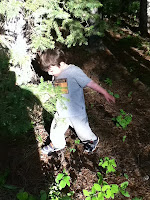 The group mobilized to search. Two headed for the beach, which was crowded and noisy and hot, and I couldn't see him going into the water alone, but...I couldn't rule it out. Two more headed towards the toilet building he found so interesting. The teenager and another adult checked the lightly wooded area around the campsite.
I stayed at the site in case he wound up back there, but also because I was nearly immobile with panic at that point. I couldn't hear his bell. I couldn't see his neon yellow t-shirt. I had yelled at him for wandering off too far the last time I had seen him. I hadn't kept an eye on him the whole time. I hadn't been careful. I hadn't been a good mom. What if he had gone into the lake, or fallen in the woods and got hurt, or picked up in the parking lot by a stranger, or fallen in the outhouse (yeah, I was panicking all right).
I am told that it was a little less than 30 minutes when the teenager came back with him. It felt like forever. It felt like I was stuck in a whirlwind of fear for hours.
For the record, he had managed to ditch his pants (that the bell had been attached to), crawled up just under a jacked up truck in the parking lot, and was playing with his Hotwheels. A lady was found with him, talking to him, trying to get him to tell her who he was with, where mummy and daddy were, trying to get him to come out. He was not responding at all, of course, just humming and rolling his cars along the inside of the truck's running board. She was a little annoyed and frustrated with him at this point, and her raising her voice was what led the teenager to them.
So much hindsight here. Should have put a tag or medic alert bracelet on him. Should have made sure someone was assigned to watch him, with an alternate to be tagged when the watcher had to do anything else. Should have found better ways to block him from getting out of the site. It could have ended very, very badly. If he had headed for the lake. If no one had noticed him, and the truck had pulled out with him under it, so close to those big tires. If he had fallen and hurt himself, and couldn't tell anyone who he was or where he had come from.

Honestly, though, nearly every parent I know has a story like this. A child who wanders off in a public area. Who dashes into traffic. Who takes off out an unlocked front door, an unlatched back gate, around the corner of a building. Most of the time, the child is found, rescued, or retrieved. Most of the time, parents just internalize the fear and guilt, keep a closer watch, or put more locks and safeguards in place, and vow that it will NEVER HAPPEN AGAIN. But it does happen again. And we live, learn and cope.

Or the unthinkable happens. A child is kidnapped off a playground - falls in a creek behind the house - suffers from exposure - and is found too late.

Three times this past week I heard of a child that wandered with that unthinkable result. Whether someone in a moment's inattention, thought someone else was watching, or that the child was safe where they were playing, or a door was left unlocked, those parents now have to live without their child. And live with the guilt of what-if and why-didn't-I, and what-could-I-have-done.
And there are plenty of people who will encourage that guilt and vilify the grieving families for not watching their kids closely enough. For taking their children to places that are "risky". For being careless. Especially since these were all special needs kids, autistic children who were always more at risk. Journalists and bloggers, strangers on the street and the internet, judging these parents as guilty and responsible for the death of their precious, irreplaceable child. The "well, you should have watched her more closely", "you should have known he would do something like this, and been more careful", "why did you take her/leave her there when you knew she might wander off?".

But you know, these are the same people who point and snicker at a child who is acting differently from the other kids in the mall. The same people who sneer at my son's harness (why do you treat him like a dog?), or his stroller (why don't you make the lazy brat walk?), or shake their heads at stories of kids caged, locked in their rooms, confined to their houses, tethered in their yards and say, why do people treat their kids like that? Not that any of this is okay, but really, you walk a fine line as a parent, especially when your child is not typical. You don't want to restrict your child's life, or limit their opportunities to experience the world, or spoil them with overprotective measures, but you are always afraid for them, wondering what you should do, what you can do to keep them safe in a world that doesn't understand them.

I get it. I know that fear. I wish I could keep my children 100% safe all the time. I wish I could be sure that they were supervised and monitored 24/7. But I have to sleep, use the bathroom, cook, keep the house at least minimally clean and liveable, and sometimes I look away for a minute or two. I can only hope that the measures I can and do take to keep them safe will be enough. And on those days when they aren't enough, that there isn't a tragic ending.

To the parents who have lost someone so precious and loved, I grieve with you and for you. No parent is perfect, don't listen to the guilt mongers and blamers.  I hope you can get through this, and hold on to the hopeful and joyful memories of your child. Know that for every person who doesn't get it, there are hundreds of us who do, and who are out here knowing how easily it could be our child next.
THIS IS NOT YOUR FAULT. YOU DID NOT MAKE THIS HAPPEN.

And to those self righteous assholes who think they could have done so much better, who jump on stuff like this to get people to read their blogs and articles, SHUT THE HELL UP.